Our theme this week was based on the book, Brown Bear, Brown Bear, What do you see? We also did some other fun activities too.
Brown Bear, Brown Bear Activities
Early on in the week we read the book Brown Bear, Brown Bear What do you see? by Eric Carle. I love this book and had planned on using it for my story and art activity. What started out as just one activity evolved into multiple activities. Here are some things that we did.
Math Activity: Color Sorting
While we were reading the story we talked a lot about colors. That's when I decided that it would be a good idea if we did a color sort. I copied three pictures from the book: blue horse, green frog, and yellow duck. Then I found items around the house that were one of those three colors and I had Little Sweets sort the items by color. 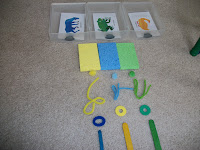 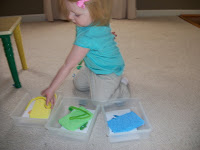 Science: Animal Identification Game
I copied all of the pictures of the animals from the book, cut them out, and glued them to index cards. Then I had Little Sweets point to the animals. I tried telling her which animal to point to but, she thought it was more fun to tell me which animals she wanted to point to. She wasn't super interested in this activity, but I hope to come back to it and emphasize the animals colors. I would like to ask her; "to point to the blue animal or the green animal etc."

I got this idea from Michelle Kincaid at http://www.atozteacherstuff.com/ Little Sweets used pudding to paint her bear brown. Great art activity and snack....

Little Sweets loves being outdoors. She also loves animals, so I decided to take her a park near our house for a nature walk. While we were at the park we saw lots of squirrels and birds. 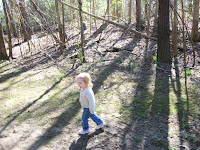 This is a picture of Little Sweets running after the birds saying; "flying, flying." 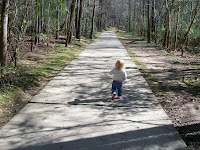 We also went to the enviromental center at the park. They had a play area for children. Little Sweets loved playing in the tree house and the tunnel. 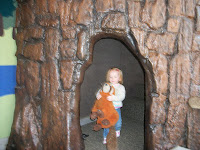 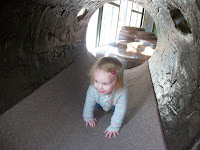 Jellybean Math
I made jellybean number cards for Little Sweets. She placed the jellybeans on the card and we counted them together. To read more about this activity and to get printables for it go here.

I also made jellybean pattern cards. I used the cards to teach Little Sweets about colors, matching, and to introduce patterns. To read more about this activity or to get the printable to go with it, please go here.

Language Arts: Learning about the Alphabet 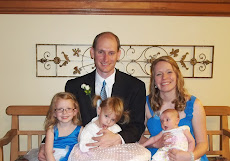 Fun Frugal Mommy
I am a happy mother of 3 beautiful children and the wife to an amazing husband. I am a former teacher turned stay-at home mom. I love being home with my children and praise God for this amazing opportunity. It hasn't always been easy, but it is worth it. I praise God for His provisions and pray that I can be a good steward over all that He has provided. 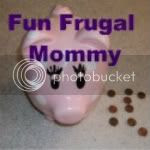 I can teach my Child

For the Kids Friday